The wreck of the English 70-gun warship, lies in the beach just beyond the eastern end of the shoreline houses of Pett Level. She was run ashore in July 1690 after being seriously damaged by the French navy in the Battle of Beachy Head. 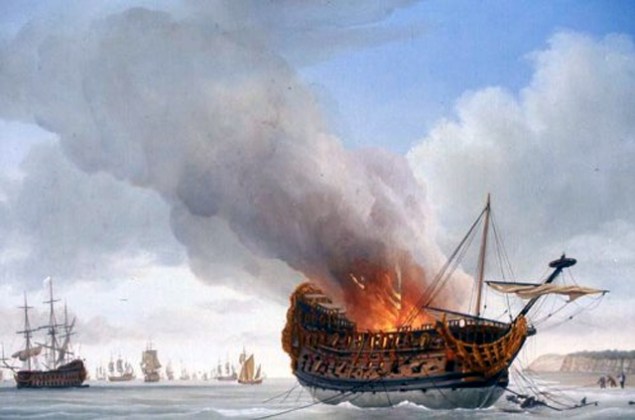 She was ordered to be burnt by her Captain John Tyrrell to stop her being taken as a French prize. During that battle several Dutch ships were lost, but this was the only English fleet casualty.

Nowadays, when the tides are extremely low and the sands have moved you can visit the wreck whose bottom is buried about 4m deep in the sands.

King Charles II had the Anne built at Chatham by Phineas Pett II and she was launched in 1678.

She was one of the 30 ships programme supervised by Samuel Pepys and she was visited by King James II in 1687, before she carried a German princess to Lisbon to be the bride of King Pedro II of Portugal. It is believed that she was named after James II’s daughter Anne who later became Queen.

The Anne is owned by the Warship Anne Trust, a subsidiary of  the Nautical Museums Trust that owns the Shipwreck Museum, and it is there that her story is told, with photographs and reconstruction paintings of the ship, and artefacts from the wreck.  Amongst them is part of an early iron grenade.

There is parking on the grass verge along the Pett Level Road at the base of the sea defence embankment, and at intervals there are steps up and over to the beach.   Be careful as you walk around the huge expanse of the 5000 years old prehistoric forest since the beach is muddy and slippery.   Also, do not walk at the base of the nearby sandstone cliffs as falls of rock can occur at any time.   If you decide to explore westwards on the beach under the cliffs, do make sure that the tides are right to enable you to return to safety. It is possible to walk all the way to Hastings ‘Old Town’, but it will take about four hours, and it must be carefully planned for low spring tides.   Unless care is taken you can be caught by the rising tide.

The Anne is protected by Section 1 of the Protection of Wrecks Act 1973 to prevent uncontrolled interference.  This means that one cannot tamper, damage or remove, nor dive for salvage.  Even fishing boats are prohibited from anchoring over her, or using fishing gear.

There are more than 37,000 sunken ships recorded in English territorial seas, but only 47 enjoy the protection of the law in England.  The Anne is one of these ships.

On 11th February 2013 the Anne was visible for the first time in 15 years and survey work will be carried out this year by the Shipwreck Museum guided by English Heritage who provide the Licenses for this work to take place.

There are no upcoming events.

Saturday and Sundays only.

Hastings Pier viewed from the west.