The wreck of the Amsterdam is the most notable feature of the beach at Bulverhythe, the tops of its ribs being exposed in the sands and the peaty clay of the prehistoric forest. This large Dutch East Indiaman was run ashore in a severe gale on Sunday 26 January 1749. 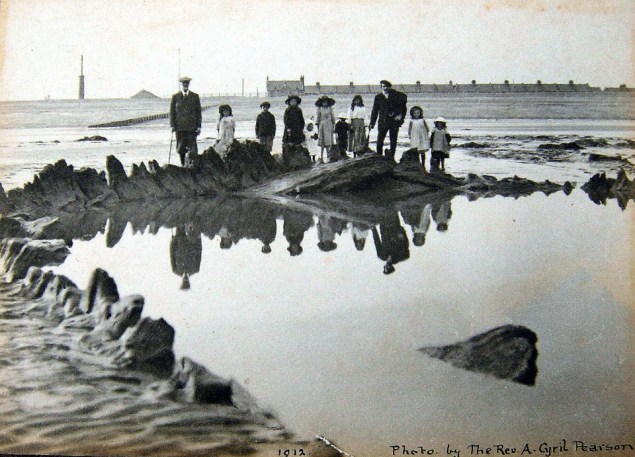 Fifty of her crew of 333 people had died of plague, traditionally said to be yellow fever, since the ship left the Netherlands on the first stage of her intended maiden trading voyage to Java, via the Cape.

Fifty of her crew of 333 people had died of plague, traditionally said to be yellow fever, since the ship left the Netherlands on the first stage of her intended maiden trading voyage to Java, via the Cape.

Forty more people were sick and dying as she was beached at high tide, their misery being compounded by the ship having lost her rudder in Pevensey Bay. The crew seems to have mutinied, since shooting certainly occurred and they broke into the cargo of wine and many became drunk.

The crew clambered down the sides of the ship at low tide that night, and were taken to safety in Hastings. Local smugglers quickly raided the ship and took some of the silver bars from the 2.5 tonnes of bullion that the Amsterdam was carrying, and, after the rest of the bullion was removed, the town crier tried to recover the missing bars from the inhabitants of Hastings. Fighting broke out between local people trying to raid the ship, and one man was shot on the beach. The Hastings coroner decided that it was not his responsibility to investigate the matter as he considered that the man had died ‘at sea’.

In just a few months the Amsterdam sank about 8m into the beach, so that nowadays the remains of her decks are buried with much of her cargo, supplies and personal possessions still intact. The bow of the ship lies towards the shore, and the seaward end the wreck is surrounded by steel sheet piling put there in the 1980’s to aid archaeological excavations by a combined Dutch and British team.

The Amsterdam is of global importance since she is two-thirds complete, the most intact East Indiaman of any country known in the world, and it was the East India Companies of Europe, particularly Dutch and the English, that opened up global trade in the 17th and 18th centuries, by using East Indiamen.

The Bulverhythe beach helps everyone to understand the changing sea level. A programme of research, funded by the Environment Agency and the Heritage Lottery Fund enabled the prehistoric forest to be dated by Carbon 14.   In 2006 it was dated to about 2000 BC, so it belongs to the early Bronze Age when early farmers were settling in the nearby countryside.   It was also discovered that the prehistoric forest is part of the silt filling an ancient river valley cut into the Cretaceous sandstone, and it was into this that the ship had sunk.

The Shipwreck Museum has published a guide booklet to the Bulverhythe shore together with a walk leaflet, and the Environment Agency has set  up information panels on a newly constructed visitor viewing platform to help guided tours of the beach organised by the Museum.  A permanent interpretive exhibition about the Bulverhythe shore and the wreck of the Amsterdam is to be seen at the Museum in Hastings, where talks and workshops enable everyone, including disabled visitors, to learn about the shore without reaching the beach.  A school pack is also being prepared for students.

The Bulverhythe shore is reached down Bridge Way, off the A259 Bexhill Road. A public car park exists on the seaward side of the Bexhill Road a short walk west of Bridge Way. You walk down Bridge Way to the footbridge over the coastal railway line, and then onto the beach.

The viewing platform and information boards give directions to the heritage features to be seen.  Care must be taken not to climb on the rocks of the sea defences, and not to damage the Amsterdam which is an historic wreck protected by English Heritage.

There is Quick Sand around parts of the wreck so take great care when visiting the site. Guided tours of the beach are organised by the Shipwreck Museum.

Quicksand beach danger (A story from January 2015 which illustrates the dangers of quick sand in our local area.)
Please call: 01424 437452 for further Information.

There are no upcoming events.

Saturday and Sundays only.

Hastings Pier viewed from the west.