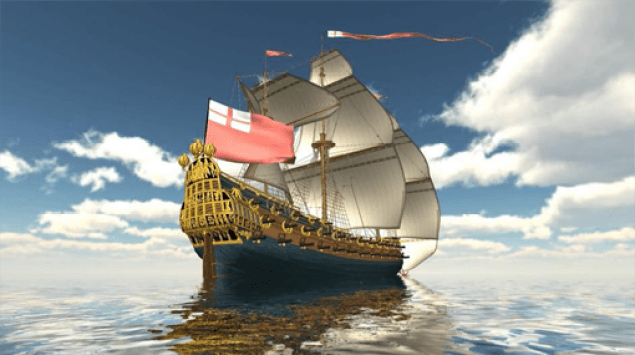 On the windswept beaches at Pett level, near Hastings, and only visible at very low tides, lie the skeletal remains of the Anne, a 70-gun third rate ship of the line, built by Phineas Pett at Chatham Dockyard as part of a late 17th century restoration of King Charles II’s Royal Navy, overseen by Samuel Pepys.

Launched in 1678, the Anne was beached at Pett Level near Hastings twelve years later during the Battle of Beachy Head.  Under the command of John Tyrrell, the vessel was deliberately torched to prevent her from being captured by the French.  In 1974, English Heritage first designated the wrecksite of the Anne under the Protection of Wrecks Act 1973, and in 1983 the vessel’s remains were purchased from the Ministry of Defence by the Nautical Museums Trust.

In an attempt to bring the 17th century to the 21st century, and building on a quadcopter site survey conducted in March 2014, a small group of researchers from the University of Birmingham have, over the past 4 months, developed a highly detailed Virtual Reality model of the Anne, in collaboration with the Shipwreck Museum in Hastings and using historical book references and paintings.  The University’s Human Interface Technologies Team specialises in advanced simulation technologies for defence, healthcare and heritage applications and their aim on this occasion has been to stage what is believed to be the world-first “resurrection” of an historic vessel using Augmented Reality techniques, viewed from an unmanned drone in flight.

In basic terms, Augmented Reality, or AR, is a process whereby computer-generated images can be superimposed – in real time – onto a real-world scene and viewed or interacted with (for example) using a smartphone, tablet or head-mounted display. Using historical reference books and naval paintings, the 3D model of the Anne was developed by two accomplished students visiting the HIT Team from Arts et Métiers, ParisTech, Laval in France, Cécile Thevenin and Emilien Bonhomme. 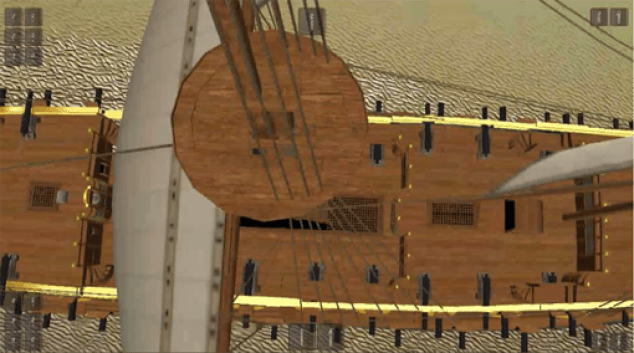 The “resurrection” exercise, undertaken on Thursday 11 and Friday 12 September, involved testing the HIT Team’s AR technologies both from the ground, and – a world first – from an unmanned air vehicle, a hexacopter, in flight, 20 metres above the wrecksite. The hexacopter was a more sophisticated version of a commercial quadcopter system used for an early site survey in March, reported by the Hastings & St Leonards Observer.

With the permission of English Heritage, the Birmingham Team, comprising Prof. Bob Stone, PhD students Chris Bibb and Vish Shingari, and the two French interns, pegged a large PVC sheet featuring a special marker into the sand within the confines of the wreck. This marker, when viewed via the gimbal-stabilised camera unit onboard the hexacopter, was processed by the team’s laptop and used to position the three-dimensional model of the Anne, creating the illusion that the vessel had actually appeared on the beach over her remains and final resting place. It was possible to fly the hexacopter over the upper decks of the 3D model, whilst, at the same time, seeing the real sand on the beach below.

Other AR trials were conducted at ground level, to try and recreate the scale of the ship using the wreck as a “template”. In one case, it was even possible to walk within the confines of the wreck and actually experience the layout of the inside of the ship.

Professor Bob Stone, the HIT Team’s Director said, “This has been one of the most ambitious simulation projects we have undertaken to date, requiring some innovative and highly risky technical solutions to bring virtual and real worlds together in a seamless fashion. I am proud to have led such a dedicated and technically gifted team – the 3D modelling efforts by our two visiting French students have been truly outstanding and the final results on the beach last Thursday and Friday really speak for themselves”.